Skip to content
Derek W. Black’s new book, Schoolhouse Burning: Public Education and the Assault on American Democracy, chronicles the history of public education in the United States and makes the unassailable case that this cornerstone of our democracy faces serious threats that we must address head on. Professor Black kindly agreed to an interview for the Southern Education Foundation blog in which he explains how public education supports our democracy, the threats it faces today, and how to protect and strengthen this crucial American institution. 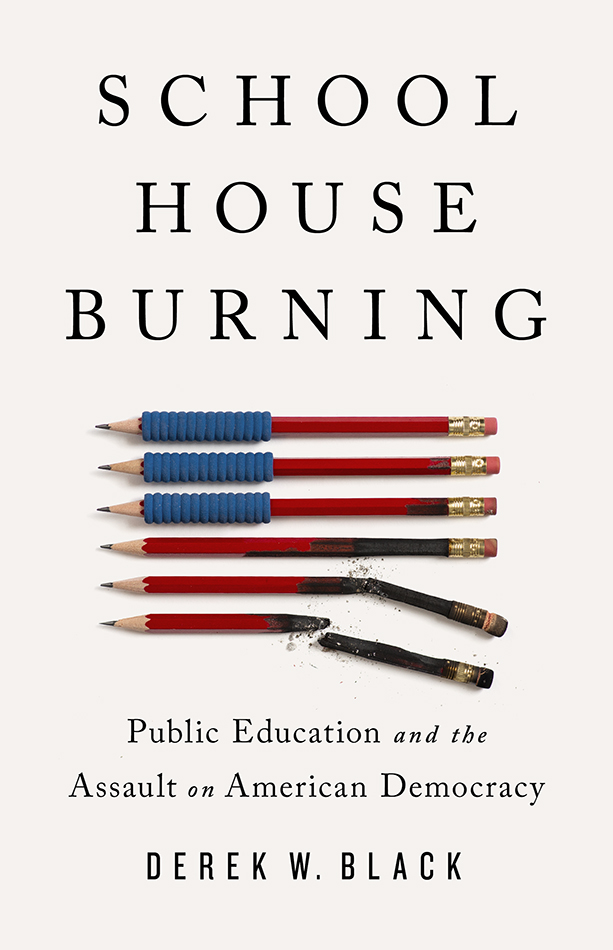 Early in your book, you assert that dismantling public education is a threat to our democracy. Can you explain why that’s so?

Education has long served as the foundation of our democracy. The point is to give regular people the tools to govern themselves. For that reason, the expansion of voting and public education in this country have always gone hand in hand.  Each time we expanded the ballot we also expanded or improved education. This was true at the nation’s founding, during Reconstruction in the aftermath of the Civil War, and again during the modern civil rights movement.  By the same token, when former slaveholders sought to reduce African Americans to second class citizens in the late 1800s and early 1900s, they tried to do it by restricting voting and education. So when folks attack public education today, I argue they are attacking democracy too.

It seems like public education is under greater threat than at any time in recent history. What forces have grown so strong as to be able to undermine it and why are they so strong?

Today’s movement is largely fueled by an anti-government crowd that believes taxes are too high and government lacks the capacity to do much good. The other element is folks who believe public schools are hostile to religion. They want government to finance private education instead. Mixed into this are families trapped in public schools that have never lived up to their constitutional obligations to students. Some of these families are understandably desperate to break the cycle. The irony is that the very legislators who have refused to fund quality public education for these families are suddenly very concerned with their plight and ready to solve it with vouchers. I fear these legislators and their lobbyists are trying to use disadvantaged families as pawns. But regardless, the intersection of these groups has made a powerful coalition.

You seem to assert that some, if not many or all, proponents of private charter schools are using them to bankrupt and eventually eliminate public schools. Is that accurate?

States are not adding new resources into the system to cover the cost of voucher programs. In fact, resources overall are shrinking and states are taking an even bigger chunk, either directly or indirectly, for public schools. The theory is that schools’ costs shrink proportionally with each student they lose, but that is not true. An elementary school could lose 40 students and their per pupil funding, but those schools will still have to run the same number of buses, turn on the same number of lights, and pay the same number of teachers as before. Now they will have less money to do it with. State and federal leaders know this but claim money doesn’t matter or that public schools waste it.

In your book, you describe successful efforts to demonize teachers in the effort to “reform” education. Do you have any insights into how reformers successfully demonized people who are generally among (and continue to be among) the most respected professionals according to Gallup surveys?

They have pushed the narrative that schools are overrun with grossly ineffective teachers. Then they focused on teacher tenure and unions as the reason why we cannot get rid of them. The trouble is that the data does not bear out these narratives. The fundamental problem is that we treat teachers so poorly that there is enormous turnover and the pipeline of new ones is nearly dry. And competition for the quality teachers out there is intense, with wealthier white communities winning most of the time.  So even if we started firing teachers in disadvantaged schools, there isn’t any one to fill their shoes. In short, segregation and inequality are the real causes of inadequate access to quality teaching.

An interesting part of our nation’s history, described in Schoolhouse Burning, is the role of Reconstruction in establishing a federal commitment to public education and our current public education system. Could you briefly talk about that?

The last four years have clearly been challenging ones for public education advocates and people who work in public education. Do you have any recommendations for policies or actions the incoming administration could implement to support public education?

Our three biggest challenges are segregation, funding inequality, and a traumatized teaching force—all three of which are interlinked in important ways. I believe if we can equalize education funding, we can break one major incentive for segregation. By the same token, if we can reduce segregation, we can reduce inequality. And when schools are more equal in general, we reduce competition among schools for a limited pool of teachers. More funding will also make appropriately sized classrooms and fair salaries possible, which will help rebuild the teacher pipeline and morale.

The straightest line to achieving this is to quadruple federal funding for low-income students, which is not as big a lift as you would think given how small the current federal investment is. But that level of funding would allow the federal government to demand some concessions from states in terms of how they allocate their own money. This new federal money could also come with integration incentives and resegregation prohibitions.

You’re an education and civil rights scholar, so have a great deal of knowledge in this area. What was the most surprising thing you learned while conducting research for Schoolhouse Burning?

My biggest surprise was how forward-thinking folks were during Reconstruction. They were sincerely trying to reshape America in the image of its highest ideas. So many of the solutions that later generations thought were their own had already been plotted during Reconstruction. Take integration, for instance. We think of that as a radical idea of the 1950s and 1960s. But white and Black children did, in fact, go to school together during the Reconstruction era. Several of the southern constitutional conventions directly addressed the question of whether Black and white children could go to school together and emphatically voted in favor of it. The words “open to all” is found in several of those constitutions, meaning that no student, regardless of race or wealth, could be excluded from public schools. It was the Jim Crow era that quashed those ideas and buried them so deeply that we never knew they had existed. Unearthing things like that 150 years later was like finding gold in a stream.

Derek W. Black is a Professor of Law at the University of South Carolina and Ernest F. Hollings Chair in Constitutional Law. He is the author of several articles and books, including Schoolhouse Burning and Ending Zero Tolerance, and an expert in education law and policy, educational equality and school funding for disadvantaged students.

Black Children Are Underserved and Undermined in School, It’s Time to Change that Reality