Just Learning: The Imperative to Transform the Juvenile Justice System

2014 – With awareness growing that schools are disciplining and suspending students of color at alarming rates, the report provides powerful evidence that young people placed in the juvenile justice system—predominately Black and Brown males incarcerated for minor offenses—are receiving a substandard education.

The report – Just Learning: The Imperative to Transform Juvenile Justice Systems into Effective Educational Systems – argues that education for the 70,000 students in custody on any given day is setting them even further back in their ability to turn their lives around. Drawing upon the most recently available data from the nation’s largest database on teaching and learning in juvenile justice systems, the report finds that the quality of the learning programs for incarcerated youth has had “little positive, enduring impact on the educational achievement of most children and youth in state custody.”

In 2009, for example, most “longer-term” students (those enrolled for 90 days or more) whose progress was documented failed to make any significant improvement in learning and academic achievement. Incarcerated youth in smaller facilities closer to their local communities actually made less progress than students enrolled in state systems. That was particularly true in the 15 Southern states, where the proportion of students enrolled in local facilities increased from 21 percent of all incarcerated students in 2007 to almost 60 percent in 2011. Part of the problem, the report says, is that the programs, which serve youth with serious learning and emotional problems, provide young people with limited supports.

Taken as a whole, the report found that effects of juvenile justice programs are “profound and crippling,” and set young people back when they should be turning lives around, according to the report.

An ‘Invisible Population’:
“We conducted this study to get a clear look at what happens to a truly invisible population,” says Steve Suitts, vice president of the Southern Education Foundation and author of the study. “The juvenile justice education programs that serve hundreds of thousands of students are characterized by low expectations, inadequate supports to address student needs, and ineffective instruction and technology. Students come out of the juvenile justice system in worse shape than when they entered, struggling to return to school or get their lives back on track.” 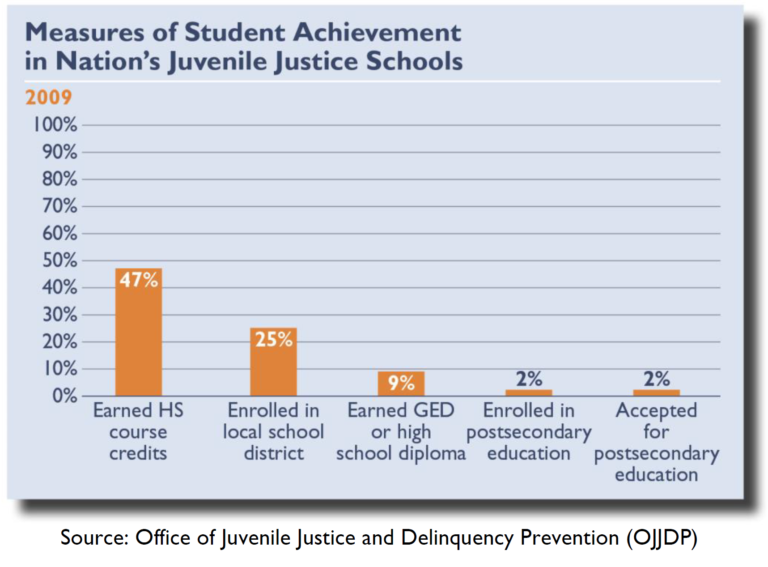 While some studies show that as many as 70 to 80 percent of young people released from residential correctional facilities will return to jail after two or three years, Just Learning notes that this is not inevitable. “Because effective education in the juvenile justice system helps to reduce recidivism and the number of youth who are in need of custody in the future, it can reduce the need and cost of future placement in juvenile justice facilities,” the report says.

Savings for Reducing Recidivism:
According to the report, juvenile justice programs that help prevent young people from becoming re-offenders could save society about $3.9 million per youth.

“The institutionalization of hundreds of thousands of young people is a detriment to their future and to society’s interests,” says Kent McGuire, president of the Southern Education Foundation. “It is up to states to ensure that students in custody leave with the skills that can help them be independent and self-sustaining.”

Emulating Effective Models:
The report says that education in juvenile justice programs can be successful. It cites programs—such as the Maya Angelou Academy in Washington, D.C.—that use teaching and learning approaches that have proven to be effective for many high-risk students and in the general population. The report also highlights research on an innovative educational program in Chicago demonstrating that cognitive behavior therapy resulted in a 44 percent reduction in violent-crime arrests among participants during the program, as well as gains in schooling, measured by days in attendance, GPA, and school persistence.

Recommendations:
To ensure that youth leaving the juvenile justice system have the skills and education they need to reenter school, find jobs, and become productive members of society, the report urges that states:

Investing in What Works: Community-Driven Strategies for Strong Public Schools